Indie Authors and the Case of Time 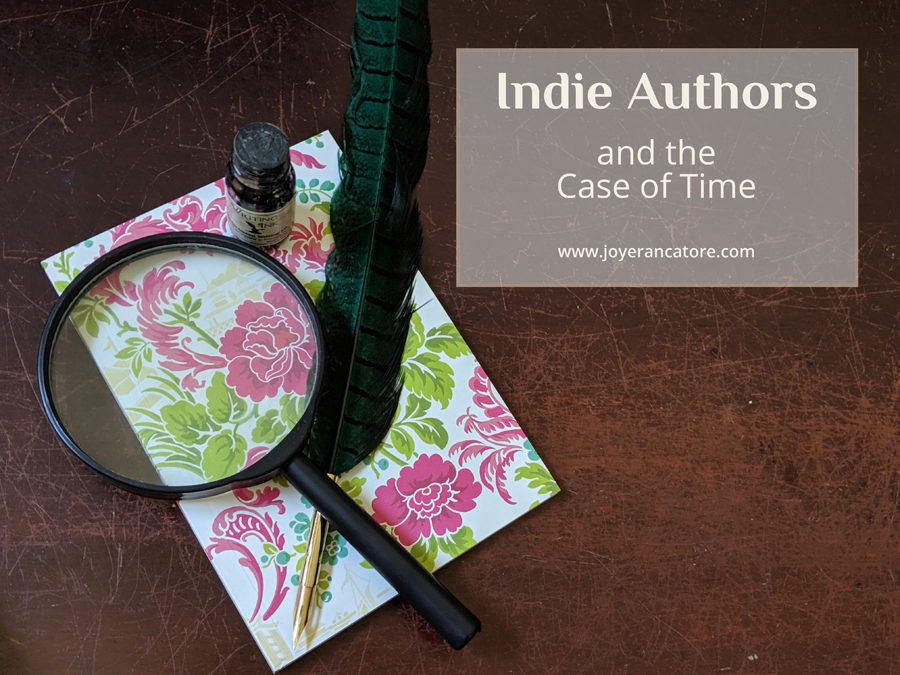 I got the question the other day. The one that makes me cringe and frantically glance around for an escape while doing a mental run-through of what the asker’s intentions could be. You know the one.

A stigma still lingers with some people when it comes to that word. A remnant still walks amongst us who say the word with a sneer to rival the best 50s TV bully. So, when I get the question, I quickly pull together all I know about that person’s character to determine if they’re curious or a bully. I decided this person most likely fell in that first category, like with a fellow writer’s viewpoint.

Turns out I was right. She’d been considering self-publishing for her own writing. Once again, not an unusual response. The self-pub boom has certainly given many more people the confidence that publication could be possible for them. It feels more attainable, within reach, than the traditional model.

I remember when I used to imagine being published. It was always by a huge company, and the announcement was followed by acclaim and caviar and red carpets. Then I’d wake up in a cold sweat as I realized such lofty positions didn’t have my name on them. Of course, you and I know that glitz and glamour is no author’s reality these days, and we’ve got more options for publishing than you can shake a stick at with all the fantastic smaller and mid-size presses joining the big guns at the literary table.

What surprised and shocked me was this person’s next statement. Though, in retrospect, I don’t know why. It really is the most logical misconception I’ve ever encountered. She gave me her reason for wanting to pursue self-publication.

(And, I paraphrase) I don’t have time to be trying to get published.

She referenced having to contact agents and all with her reason, and I had a flashback to my days of querying magazines. More shuddering. That’s not a process I enjoyed either.

As I reflected on her reasoning behind considering a self route, part of me wanted to hug her and lead her on a journey of publishing exploration. Another part stood still for a moment and reflected on time as it relates specifically to Indie Authors.

My friend was right that it takes a ton of time to write and prepare a manuscript and query letters and a list of potential agents and/or publishers and all that comes along with that. It’s absolutely exhausting and feels like an impossible feat. Plus, it’s not like you can really draft one email and one letter and be done. Every agent and every company wants something a little bit different. Just like every reviewer. (I just went through that process—EXHAUSTING!)

For the querying process, you have the added emotional toil of wishing and hoping and envisioning … and being crushed. Over and over and over.

So, I get it. I really do. Who’s got time to sit around waiting on responses?

You knew it was coming, right?

If you’re an Indie Author, you’ve probably been screaming at your screen as you’ve read my slow approach back to the whole time concern. Just this week, I have done the jobs of a graphic designer, marketing professional, PR campaign manager, publisher, author, events coordinator, administrative assistant, agent and editor. Those are the jobs for nine different people, in case you lost count. I’ve also celebrated my oldest child’s birthday and kept my family fed and clothed.

*I’m laughing maniacally right now. It might be the lack of sleep.*

Any way you approach publication, you’re looking at a giant investment in time. So, as crazy as I am right now, running on only a few hours of sleep with a list longer than humanly possible to reach the bottom of, why on earth would I recommend this time vortex over the other?

Well, first, this route isn’t for everyone. I just have to get that out there. I feel like the ability to approach Indie publishing with a long-term career mindset requires a slightly different alignment of determination, experience, adaptability and desire to be a constant learner than an approach to traditional publishing does. Not that one is better than the other. They just require different viewpoints, goals and priorities.

Next, what does the self-publishing route offer if time doesn’t seem to be a benefit?

Any time I question my decision, I whisper that little word and stroke it as I would my precious Tolkien Cat. At the end of the day, I might be the one making all the decisions and calling all the shots, but—as tiring and overwhelming as that is—I’m the one who has the final say. I choose my title. I approve my cover design. I keep the deep-rooted elements of Christian faith that I never planned on in my southern fiction novel because that’s the way I was apparently meant to write it, but I also don’t have to label it “Christian fiction.”

To me, control is invaluable.

For me, control means never compromising.

Um, Joy? Haven’t we already established the fact that, if anything, self-publishing might require more time?

True, but time can be rather wibbly-wobbly, my friend. Even away from a special blue box.

Time is a benefit to Indie publishing because I get to set my own timetable. My production schedule is only limited by my own drive and work ethic. I can produce four or five books in a year when I’m my own publisher.

Had I taken the traditional route, by the time I went through the querying process and landed my match-made-in-heaven agent, then re-revised my manuscript to fit what our target companies would be looking for, then went through the submission process (and may or may not have had a few more revisions tossed in there), then went through the contracts and editing and waited for the company’s pre-determined perfect release date for this book, I will—realistically and conservatively—have a dozen books out.

A dozen books that are actively making me money at a higher royalty than I could ever have with an agent and a company behind me. Granted, their marketing reach and influence would be far more broad than mine, so you could logically argue the finances could very well be a wash.

Whatever publication route an author takes requires time and comes with pros and cons. Some cons for me might be pros for another writer, and vice versa. With all these considerations in mind, for me, time is on my side as an Indie Author.

I’m off to make the most of it! Readers, what questions do you have about the publishing process? I only know much of what I do about publishing because it’s an industry I’ve been studying for decades. Before I seriously considered becoming an author, I gave little thought to how I got the magical portals to other realms that adorned my shelves and graced my nightstand. Except, of course, for romantically envisioning the authors all alone in a peaceful cabin in the woods, surrounded by deer and rabbits and the musical notes of the wind through the trees—or stepping out of their limos to walk into their castles. (Truth bomb: I know hundreds of authors. Neither description fits any of them. My daydreams lied to me!)

Writers, what are your pros and cons for your chosen publishing path? Where does time fall on that list? If you’re still in the deciding process, what questions or concerns do you have? What approach do you find yourself leaning toward? What’s attracting you most to it? And, what’s holding you back from making your final decision?